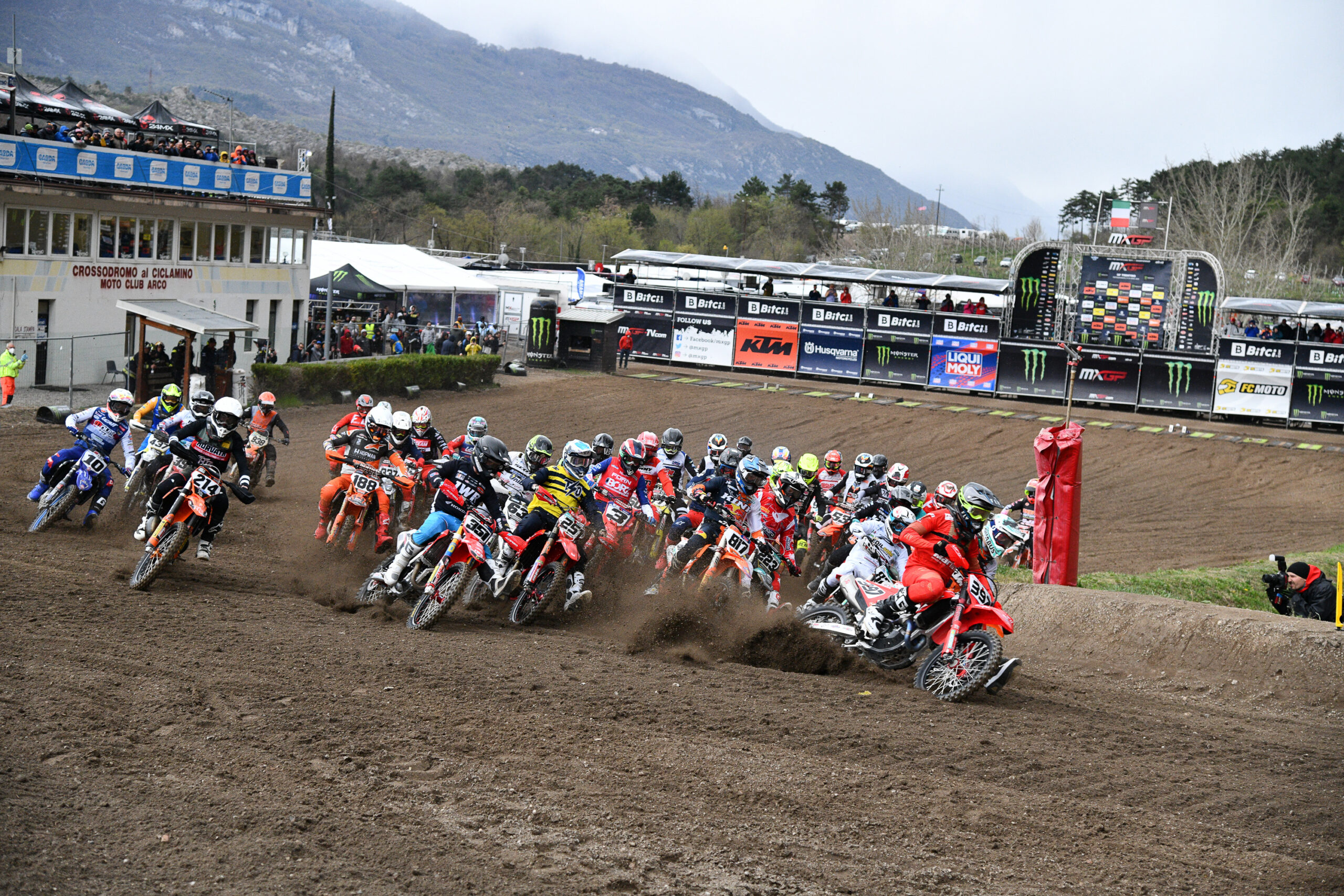 Motocross first evolved in Britain from motorcycle trials competitions, such as the Auto-Cycle Clubs’s first quarterly trial in 1909 and the Scottish Six Days Trial that began in 1912. When organisers dispensed with delicate balancing and strict scoring of trials in favour of a race to become the fastest rider to the finish, the activity became known as “hare scrambles”, said to have originated in the phrase, “a rare old scramble” describing one such early race. Though known as scrambles racing (or just scrambles) in the United Kingdom, the sport grew in popularity and the competitions became known internationally as “motocross racing”, by combining the French word for motorcycle, motocyclette, or moto for short, into a portmanteau with “cross country”.
The first known scramble race took place at Camberley, Surrey in 1924. During the 1930s the sport grew in popularity, especially in Britain where teams from the Birmingham Small Arms Company (BSA), Norton, Matchless, Rudge, and AJS competed in the events. Off-road bikes from that era differed little from those used on the street. The intense competition over rugged terrain led to technical improvements in motorcycles. Rigid frames gave way to suspensions by the early 1930s, and swinging fork rear suspension appeared by the early 1950s, several years before manufacturers incorporated it in the majority of production street bikes. The period after World War II was dominated by BSA, which had become the largest motorcycle company in the world. BSA riders dominated international competitions throughout the 1940s.

In 1952 the FIM, motorcycling’s international governing body, set up an individual European Championship using a 500 cc engine displacement formula. In 1957 it was upgraded to World Championship status. In 1962 a 250 cc world championship was established. In the smaller 250 cc category companies with two-stroke motorcycles came into their own. Companies such as Husqvarna from Sweden, CZ from the former Czechoslovakia, Bultaco from Spain and Greeves from England became popular due to their lightness and agility. Stars of the day included BSA-works riders Jeff Smith and Arthur Lampkin, with Dave Bickers, Joe Johnson and Norman Brown on Greeves.

By the 1960s, advances in two-stroke engine technology meant that the heavier, four-stroke machines were relegated to niche competitions. Riders from Belgium and Sweden began to dominate the sport during this period. Motocross arrived in the United States in 1966 when Swedish champion, Torsten Hallman rode an exhibition event against the top American TT riders at the Corriganville Movie Ranch also known as Hopetown in Simi Valley, California. The following year Hallman was joined by other motocross stars including Roger DeCoster, Joël Robert, and Dave Bickers. They dominated the event, placing their lightweight two-strokes into the top six finishing positions. A motorcycle sales boom in the United States fueled by the Baby Boomer generation, helped to spark a growth in the popularity of motocross among young Americans.

Japanese motorcycle manufacturers began challenging the European factories for supremacy in the motocross world by the late 1960s. Suzuki claimed the first world championship for a Japanese factory when Joël Robert won the 1970 250 cc crown. The first stadium motocross event took place in 1972 at the Los Angeles Coliseum, and was promoted by Mike Goodwin and Terry Tiernan, then-president of the American Motorcyclist Association (AMA). The event was won by 16-year-old Marty Tripes. This event paved the way for constructed, stadium-based motocross events known as Supercross. In 1975, a 125 cc world championship was introduced. European riders continued to dominate motocross throughout the 1970s but, by the 1980s, American riders had caught up and began winning international competitions.

From the late 1970s to early 1990s, Japanese motorcycle manufacturers presided over a boom period in motocross technology. The typical air-cooled two-strokes with twin-shock rear suspension and telescopic front forks gave way to machines that were water-cooled and fitted with single-shock absorber rear suspension and “upside-down” (or inverted) front forks. Although the advancement of two-stroke engine technology was the primary focus of the major Japanese motorcycle manufacturers well into the mid 1990s, a rekindled interest in engineering a competitive, lightweight four-stroke motocross race bike was expressed among several brands, including Yamaha Motor Corporation and Husqvarna.

To further inspire the research and development of four-stroke motocross racing technology, the American Motorcyclist Association, America’s leading motorcycle sport governing body, increased the allowable displacement limit for four-stroke powered machines in the 125 and 250 AMA Supercross and Motocross championships. Due to the low relative power output of a four-stroke engine compared to the then-dominating two-stroke design, the displacement limit of a four-stroke power motocross bike was raised to 250cc in the 125 class and 550cc in the 250 class.

The new regulations resulted in competitors aboard four-strokes made by smaller European manufacturers, with Husqvarna, Husaberg, and KTM winning world championships on four-stroke machinery. In 1997, Yamaha unveiled a prototype 400cc four-stroke motorcycle, the YZM 400, which was debuted in the FIM Motocross World Championship. The motorcycle made its U.S. debut in 1997, where Yamaha Factory Racing rider Doug Henry led every lap of the main event at the 1997 AMA Supercross Finale and became the first person to win an AMA Supercross race on a four-stroke powered motorcycle. Following Yamaha’s release of the production model YZ400F in 1998, Henry won the 250 AMA Motocross Championship and became the first person to win a major AMA Motocross title on a four-stroke powered motorcycle. This success motivated the remaining major manufacturers, Honda, Kawasaki, and Suzuki, to develop their own four-stroke motocross race bikes. By 2006, every manufacturer had begun competing with four-stroke machines in the AMA 125 (FIM MX2) and 250 (MX1) classes.

The sport has further evolved into a sub-discipline similar to supercross known as arenacross, which is held in small indoor arenas. Classes were also formed for all-terrain vehicles. Freestyle motocross (FMX) events where riders are judged on their jumping and aerial acrobatic skills have gained popularity, as has supermoto, where motocross machines race both on tarmac and off-road. Vintage motocross (VMX) events take place – usually[quantify] for motorcycles predating the 1975 model year. Many VMX races also include a “Post Vintage” portion, which usually includes bikes dating until 1983.