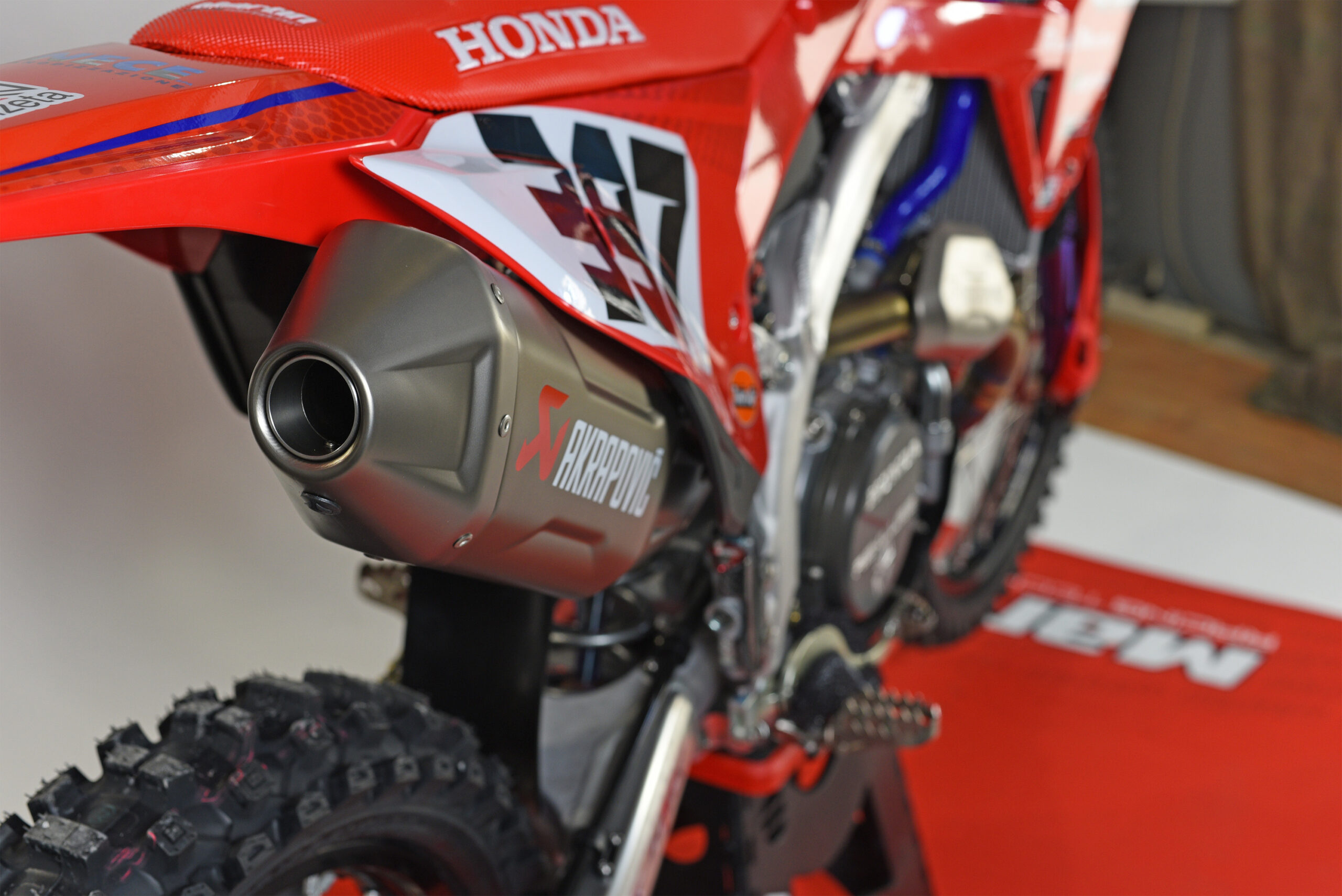 A number of other types of motorcycle sport have been derived from Motocross:

The supercross season takes place during the winter and spring months, with races in a different city every weekend. There are 17 races in the AMA Supercross Championship schedule, normally beginning in Anaheim, California, and ending in Las Vegas, Nevada. The 250 cc class is split into two series, east and west. The 450 cc class has one large series with events across the US and Canada.

Freestyle Motocross (FMX), a relatively new variation of supercross started by the South African champion, Marco Urzi, does not involve racing and instead it concentrates on performing acrobatic stunts while jumping motocross bikes. The winner is chosen by a group of judges. The riders are scored on style, level of trick difficulty, best use of the course, and frequently, crowd reactions. FMX was introduced to the X Games and mainstream audiences in 1999.

Supermoto uses motocross bikes converted for racing on tracks consisting of three sections: flat dirt, dirt obstacles, and paved road. The bikes have special road-racing tires with grooved tread to grip both the pavement and dirt. Some tracks for these race events have jumps, berms, and whoops like motocross tracks. For special events, the Supermoto track may incorporate metal ramps for jumps that can be disassembled and taken to other locations. Supermoto races may take place at modified go-kart tracks, road racing tracks, or even street racing tracks. There are also classes for children, such as the 85 cc class.

Supermoto began in the US the late 1970s when TV journalist Gavin Trippe envisioned a racing event that would prove who the best motorcycle racer was. From 1980 to 1985, he organized a yearly event called “The Superbikers”, which pitted the top riders from three disciplines, flat track, road racing, and motocross against one another on modified bikes raced on special tracks on the television show. Its first exposure to a wide audience came on the American television program ABC’s Wide World of Sports in 1979. After 1985, the sport declined and received little exposure in the US, but in Europe, it started gaining popularity, and in 2003 it was revived in the US, when the name became Supermoto.

ATV/Quad Motocross
Throughout the United States and the United Kingdom there are many quad racing clubs with enduro and quadcross sections. GNCC Racing began around 1980 and includes hare scramble and enduro type races. To date, events are mainly held in the eastern part of the United States. GNCC racing features many types of obstacles such as, hill climbing, creek and log crossings, dirt roads and wooded trails.

The ATV National Motocross Championship was formed around 1985.[21] ATVMX events are hosted at motocross racetracks throughout the United States. ATVMX consists of several groups, including the Pro (AMA Pro) and Amateur (ATVA) series. Championship mud racing (CMR)[22] saw its infancy in 2006 as leaders of the ATV industry recognized a need for uniformity of classes and rules of various local mud bog events. Providing standardized rules created the need for a governing body that both racers and event promoters could turn to and CMR was born. Once unified, a true points series was established and lead to a national championship for what was once nothing more than a hobby for most. In 2007 the finalized board of directors was established and the first races were held in 2008. Currently, the CMR schedule includes eight competition dates spanning from March to November. Points are awarded throughout the season in several different competition classes of ATV and SxS Mud Racing. The 2008 year included Mud Bog and Mudda-Cross competitions, but the 2009 and future seasons will only have Mudda-Cross competitions. Classes range from 0 to 499 cc, to a Super-Modified class which will allow any size ATV in competition.

Sidecar racing, known as Sidecarcross has been around since the 1950s but has declined in popularity since the mid‑1980s. This variant is common in Europe, with a few followers in the United States, New Zealand, and Australia. The premier competition, the Sidecarcross World Championship, is contested on European tracks only and almost exclusively by Europeans.

Motocross sidecars are purpose built frames that resemble an ordinary motocross-cycle with a flat platform to stand on attached to either side and a handlebar at waist height to hold on to. The side of the “chair” (slang for the platform) usually follows the side of the road the nation in question drives upon, but not always. The passenger balances the bike by being a counterweight, especially in corners and on jumps. It is driven on ordinary crosstracks.

It is very physically demanding, especially for the passenger. This is reflected in most in the Swedish term for passenger, burkslav, roughly translated as trunk/barrel-slave. This name comes from the early sidecars which resembled road motorcycle sidecars and not today’s platform.

Pit bikes are small motorbikes that participants in powersports events use to ride around the pits, which are the staging areas where team support vehicles are located. More recently, they have been used in races held on either supercross or motocross tracks. Numerous performance and aesthetic upgrades are often applied to pit bikes.

Originally, there was only one way to acquire a pit bike. A rider would buy a child’s minibike, usually a Honda CRF110 or Kawasaki KLX110, and apply all the necessary upgrades and modifications to build a competitive pit bike. Of course, a rider could also buy a used bike. Since 2004, manufacturers like Thumpstar have begun designing, manufacturing, importing, and selling already complete pit bikes. These bikes are less expensive, and require less time to complete.[23]

Pit bikes are powered by 4-stroke, horizontal, single-cylinder engines ranging anywhere in displacement from 49 cc to 195 cc. A typical pit bike is usually a small dirt bike, but it has become common to be able to buy pit bikes with street-style wheels and tires. Pit bikes with street tires, as opposed to knobby tires, are used in Mini Supermoto Racing.

Pit bikes are frequently heavily customized with decorative add-ons and performance-enhancing parts. Many riders and mechanics bore-out or replace engines in order to increase displacement and therefore power output. Heavy duty suspension systems are often a necessary addition, since the stock mini-bike suspension was designed for a small child. Wheel, brake, and tire upgrades are sometimes performed to improve handling.

Pit bikes also have their own separate competitions held with classes generally corresponding to wheel size. This is a notable difference from Motocross and Supercross competition, where classes are separated by engine displacement. Pit bike racing is a relatively new niche of motocross, and as such, there is no official governing body similar to the AMA.